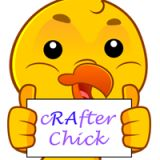 In late 2012 after a decade since last crocheting, I refound my love for all things crochet when my health declined. I quickly became obsessed with making novelty, animal and character hats for my mother to wear when reading to her Kindergarten classroom, for the kids to wear in class plays, my adorable nephews and nieces and for children with Juvenile Arthritis.

Since starting my blog in February 2013 I have written and shared 100 free crochet patterns now on my blog plus have several dozen in writing process to be shared in near future. I am happy to share my yarn and crochet obsession with so many while raising awareness about Autoimmune Arthritis. I named my blog “cRAfterChick.com : A Crafty Chick with Rheumatoid Arthritis” after my main focus, an online community I created called RA Chicks: Women with Rheumatoid Arthritis (rachicks.com) to create an online support community for those women dealing with Autoimmune Arthritis like myself. They inspired me to keep on going and creating even when my hands would say no so many of my personal projects are dedicated to raising awareness, funds for a cure or to brighten the day of children with Juvenile Arthritis. Though my Mom and her classroom do keep me pretty busy in projects.

I admit I am one of those crafters that have works in progress in various stages piled about and often pick up a piece wondering what it was intended to be used for in the first place but I eventually get around to finish them sooner or later.

You can find me in social media at:

Crochet Patterns for the Summer

A Garden of Flowers

This website uses cookies to improve your experience while you navigate through the website. Out of these, the cookies that are categorized as necessary are stored on your browser as they are essential for the working of basic functionalities of the website. We also use third-party cookies that help us analyze and understand how you use this website. These cookies will be stored in your browser only with your consent. You also have the option to opt-out of these cookies. But opting out of some of these cookies may affect your browsing experience.
Necessary Always Enabled
Necessary cookies are absolutely essential for the website to function properly. This category only includes cookies that ensures basic functionalities and security features of the website. These cookies do not store any personal information.
Non-necessary
Any cookies that may not be particularly necessary for the website to function and is used specifically to collect user personal data via analytics, ads, other embedded contents are termed as non-necessary cookies. It is mandatory to procure user consent prior to running these cookies on your website.
SAVE & ACCEPT